This issue begins at a medieval fortress to which our character Tomislav is about to meet in battle on his own, the head of his opponents army, we are given a narration within some pages, giving a little back history to Tomislav, as well as the bloodshed that has been shed.

We learn the opponent Istvan use to sweep the stables of his Tomislavs father, an has given his allegiance to the countries vagabonds, an confronting Tomislav that he desires not to kill him, to end this confrontation peacefully.

Going back into a Narration again we see the panel of what looks to be a raven, that leads into us seeing the crest of Tomislavs on his Chest with his Chainmail.

As we jump a few pages ahead, we see Tomislav has pulled out one of his unique swords that he has bought with him, about to battle Istvan.

Big Thanks to my LCS & to the creator of this at Image Comics. 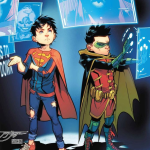