My relationship with Fred Perry has been rather odd. I’ve never read much GoldDigger but was always aware of it. When I was young I can remember reading by accident the first rough books of the GoldDigger series, something that I rather enjoyed but always wanted more of. However, my finances as a lower middle class middle schooler with no job and lack of comic shops in my area prevented me from obtaining it.

Well those days are now passed and now I am a shitty college student with a slightly above minimum wage job and plenty of spare cash to give to my local comic shop, and right on my pull is GoldDigger #251 by Fred Perry, the longest continuous running comic on the market, published by the Texas based Antarctic Press. A company which prides itself upon making “American” manga.

The Fred Perry style is something that is rather interesting. Inside this book, you’ll find what is rather pretty much nothing but fan service, cheese cake, and fun. The cover is a send up to an old X men cover and is rather nice though it seemed my cover was a bit on the low resolution side. It’s a slight error, but it’s still an enjoyable cover. It gives you a taste of the style that is consistent in it. You’re getting colorful art with rounded lines with very few sharp edges. The fan service is something I was surprised on, with literally one of the characters dressed up as a character from Final Fantasy XV. This is due to hating cleaning clothes and having to now wear all her cosplay outfits of which she apparently has rather a lot. There’s a call out to Transformers, background characters of The Smurfs, and what is apparently a double take Garfield.

Everyone, from men to women are drawn in exaggerated manners, emphasizing a more sexual masculine and feminine tone. It is beyond a doubt a book built upon cheese cake, but I actually don’t really mind it as it isn’t too overly done or in a way that unflattering to the eye. Fred Perry allows you to have fun with such.

I’m not too knowledgeable about the world of Gold Digger and its lore, but a brief summary of what occurs is that Vampire Queen Natasha Volstov with the aide of the mystery and villainous Hurt-Bot, escapes a magical penitentiary in the Jade Realm. This turns out to be a rather bad idea as Natasha begins to drink from the life force which empowers her. Soon after, she seeks revenge on not just the Gold Digger family, but she also wants revenge from her former compatriots, whom she feels betrayed by. While I feel left out in the cold with whom these characters exactly are and what is exactly happening, I was thoroughly entertained and left excited for the next book.

Gold Digger Issue #251 is fun book that is a great introduction to the series. Fred Perry, whom is both the writer and illustrator of this long running series is fun and entertaining, giving a you a good story with every page full fun, even if you don’t like the bits of cheese cake. A definite option for anyone’s pull list. 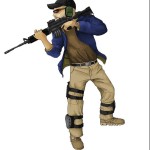