Hello everyone! And, welcome to my first entry to this glorious website – where I’ll be keeping everyone informed of different anime and manga, from throughout the years! So, let’s get things started! Column type all set? Ready? GO!!!

For those of you whom don’t know about “Record of Lodoss War”, it’s an older franchise – that got it’s start within the public eye as a Medieval Fantasy novel known simply as: “Record of Lodoss War” (back in 1988). Which was a classic tale of humans, elves, dwarves, swords, and sorcery – all taking place upon a cursed island known as: “Lodoss”.

This was later adapted into a manga series called: “Record of Lodoss War: The Gray Witch”, and was later picked up by Kadokawa to be transformed into a thirteen episode OVA (Original Video Animation) which was animated by the legendary: “Madhouse” animation studio. Whom are known for their works on anime such as:

And, many, MANY others.

This choice brought a bit more attention to the series, as the Medieval Fantasy genre was still seen as childish back then – and wouldn’t become popular within the eyes of mainstream media for another eleven years, when the movie adaptation of Fellowship of the Ring would release.

Needless to say, Record of Lodoss War had a lot of work to do – if it wanted to gain traction in the industry. However, there was an ace up the writers’ sleeves. The Sword World table top role playing game.

In order to gain a larger audience for the OVA and manga series’, the creators of “Record of Lodoss War” released the entirety of the Gray Witch saga, as a playable campaign for Sword World. Which not only gained the attention of the many vocal and secretive players within Japan, but proved quite simple for the creators of the Lodoss franchise – as, before even creating the novels that first introduced Lodoss into the public eye, the entire series spawned as a custom D&D campaign that the creators had held within their spare time.

That’s right! The entire Gray Witch saga started off as a bunch of friends sitting around, and recording their D&D session!

This little secret weapon of theirs lead to a much wider audience than any could have expected, gaining the series enough fame to be brought over to the western world – obtaining not only a subtitled release, but an English dubbing as well. One that would be announced at the Big Apple Anime Fest in the early 2000’s.
It was there that the western world would be introduced to characters whom had left an everlasting impact on the anime industry.

Together these characters travel across the cursed island of Lodoss, their individual wants and desires culminating in a single purpose – as they fight against their foes and even fate itself. However, their journey starts out in a not so grand way…

Starting with episode two (yes, episode two) of the OVA, “Record of Lodoss War” puts the viewer on a linear path – starting at the beginning of our hero Parn’s journey. His simple way of life is changed forever, when a childhood friend of his “Liara” is attacked by a group of goblins – while bathing in a nearby body of water. Her screams for help catching Parn’s ears, as she runs away from the creature.

With no time to lose, weapon in hand – the young man runs in the direction of his friend’s cry for help. And, upon arrival – fights off the four goblin without hesitation, causing three of them to retreat upon his slaying of one of the group… But, not without sustaining some injuries first. It’s at this point in time, that Parn runs into his longtime friend and companion “Etoh” – whom has just so decided to visit Parn and his home village, while following his master’s teachings of “life being the best teacher for a priest”.

Together, the two of them decide to escort young Liara back to the village – before heading to Parn’s home, where Etoh cures his wounds. Unbeknownst to them, the danger that comes looming ever closer. A small goblin battalion, which is spotted by the young elf “Deedlit” – as she spies upon their peculiar behavior of being out within the daylight, despite being nocturnal creatures.

Back in the village however, the rest of the town’s people are none too pleased with the fact that Parn slayed one of the four goblin. Though the father of Liara is grateful for the young man saving his daughter, everyone in the town is now worried about the high likely hood of more goblin invading the village for revenge. A fear that is soon confirmed, as the battalion invades that very evening. Slaying many villagers, and wounding others.

Not one to take this laying down, Parn takes up his father’s old sword – as he and Etoh rush into the fray. Eventually forcing the hot-headed young fighter to come face to face with the goblin general. An overpowering foe, that seems to outclass Parn in strength and endurance. The brutish creature nearly slays our hero, but as luck would have it the Dwarf “Ghim” and sorcerer “Slayn” arrive just in time. As Slays puts a mystical enchantment upon Parn’s blade, allowing him to lunge forth and slay the Goblin general – in a last ditch effort.

With the damage done, Parn is no longer welcome within the village – and must leave before sunset the next day, as punishment for what the villager’s consider to be his fault. However, Parn’s pain soon turns into determination – as he dons his father’s old bronze platemail, and burns his former house to the ground. Leaving nothing behind for him to return to, nor yearn for.

Upon approaching the exit of the village, he is joined by Etoh, Slayn, and Ghim – the young priest giving a warm smile and optimistic motivation, while the grizzled dwarf offers him some practical training in how to use a blade.

With this, the four of them leave towards the next town over – carrying nothing but their gear, and food for the journey. Unaware of where this chance meeting would inevitably take them, or the high elf that continued to watch them from the shadows…

And this, my friends – is but the start of the saga.

As one might assume, I have left quite a few things out in my synopsis of the episode here – as I do not wish to spoil everything about the beginning for you all. For this is a series that should very much been seen by everyone that’s a fan of the Fantasy genre. And, with the series celebrating it’s 30th anniversary – there’s no better time to jump into the franchise.

From it’s story, character development, visuals, and everything in between – the “Record of Lodoss War” OVA is an absolute joy to watch. And will leave you holding back tears and wanting more, when the final credits roll. 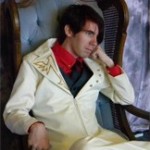 I focus mainly on the topics of anime/manga here, while I focus on gaming over on the tube of yous – and generally like to remain extremely chill about things, so I can view them with a neutral perspective.

However, don’t expect me to give series’ a free pass because of this. For, I am fairly critical about the media I partake in. Pointing out aspects that both deserve praise and critiquing – while keeping in mind the main point that should be acknowledged: “Is it fun”.